Varde Museums, BIG-Bjarke Ingels Group and Tinker Imagineers celebrate the opening of TIRPITZ – a sanctuary in the sand that acts as a gentle counterbalance to the dramatic war history of the site in Blåvand on the west coast of Denmark.

The new TIRPITZ transforms and expands a historic German WWII bunker into a groundbreaking cultural complex comprising four exhibitions within a single structure, seamlessly embedded into the protected shorelands of Blåvand in western Denmark. The construction of the 2,800 m2 ’invisible museum’ expected to attract around 100,000 visitors annually, commenced in 2014 and was generously financed by A.P. Møller and Chastine Mc-Kinney Møller Foundation, Nordea Foundation, Augustinus Foundation and Varde Municipality.

“The new TIRPITZ is planned, built and furnished as a portal to the Danish West Coast’s treasure trove of hidden stories. It has been our goal to create a humble, world-class attraction surprising its visitors with new perspectives on the majestic landscape. Our guests deserve the best; with BIG’s limitless and inviting architecture and with Tinker Imagineers’ wondrous and playful exhibitions, I feel we have achieved this. TIRPITZ is an incredible, one-of-a-kind experience – violent, astonishing, dramatic, hidden – almost invisible.” Claus Kjeld Jensen, Director, Varde Museum.

As an antithesis to the heavy volume of the WWII bunker, the museum appears subtly as the intersection between a series of precise cuts into the landscape. Contrary to the hefty and intrusive regelbau construction of the original artillery fortress – simply designed as an immense concrete block – the new TIRPITZ finely cuts into the dune and camouflages with the landscape.

Upon arrival, the visitors will first see the bunker and as they approach, see the fine cuts and paths leading towards the center of the museum complex.

“The architecture of the TIRPITZ is the antithesis to the WWII bunker. The heavy hermetic object is countered by the inviting lightness and openness of the new museum. The galleries are integrated into the dunes like an open oasis in the sand – a sharp contrast to the Nazi fortress’ concrete monolith. The surrounding heath-lined pathways cut into the dunes from all sides descending to meet in a central clearing, bringing daylight and air into the heart of the complex. The bunker remains the only landmark of a not so distant dark heritage that upon close inspection marks the entrance to a new cultural meeting place.” Bjarke Ingels, Founding Partner, BIG.

The central courtyard allows access into the four underground gallery spaces that have an abundance of daylight even though they are literally carved into the sand.

The exhibitions, designed by Dutch agency Tinker Imagineers showcase permanent and temporary themed experiences. Every gallery has its own rhythm, beating in sync with its storyline: high and low, night and day, good and bad, hot and cold, the passing of time.

Army of Concrete tells the human stories in the shadow of Hitler’s enormous defense project, the Atlantic Wall; Gold of the West Coast is Western Europe’s most comprehensive exhibition of amber, presented in an enchanting amber forest; and West Coast Stories tells 100,000 years of west coast history and is turned into a nighttime 4D theatre twice an hour.

From the sunken galleries, visitors are able to walk into the historic bunker, which grounds the tale of an impressive war machine. In the dark, visitors can play with light and activate shadow plays that reveal how the bunker should have functioned.

“TIRPITZ is a unique opportunity to combine nature and culture in a spectacular fashion. A visit to the museum is not a visit to an exhibition gallery, but a scenic journey through time and space of West Jutland. The idea is that the whole place itself comes to life following the rhythms of nature.” Erik Bär, Partner/Director, Tinker Imagineers.

The building consists of four main materials and elements which are also found in the existing structures and natural landscape of the area – concrete, steel, glass and wood. The walls of the exhibition rooms are made of concrete cast onsite, supporting the landscape and carrying the fascinating roof decks that cantilever out 36 m. The largest roof deck weighs about 1.090 ton and the complex roof structure is engineered by Swiss Lüchinger+Meyer. The main interior materials utilized throughout the gallery spaces are wood and hot rolled steel which is applied to all the interior walls.

TIRPITZ contributes further to BIG’s experience in museum design, particularly in integrating landscape with cultural programs, while preserving the historic value and natural environment. In 2013, BIG completed the Danish National Maritime Museum, in which crucial historic elements are integrated in an innovative concept of submersed galleries. Other current cultural projects include the LEGO House in Billund, MECA Cultural Center in Bordeaux, France and the Smithsonian Institution Master Plan in Washington D.C. 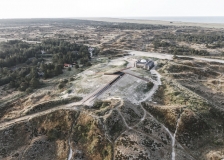 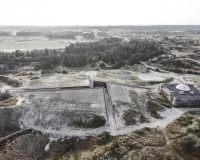 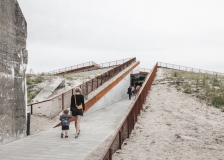 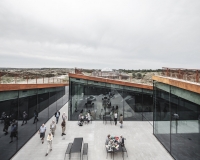 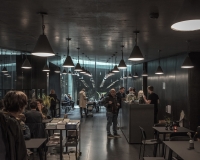 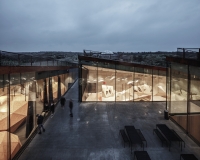 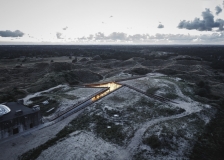