Breaking the Mega-Block Mold by UNStudio

Creating identity on an urban and a human scale

Following its implementation as a result of the rapid urbanisation of the booming middle class in South Korea, apartment living continues to be the most popular type of housing in the country. In cities across South Korea this type of housing can be found stacked in identical, densely packed, utilitarian blocks.
In 2012 UNStudio was invited by the Hyundai Development Company to propose a design intervention for two new residential developments in Daegu Wolbae which would counteract this prevailing utilitarian approach and instead create distinct identities across multiple scales. The result was a provocative yet investigative, affordable and health-focused proposal to break the impersonal homogeneity and the traditions of high density living in South Korea. 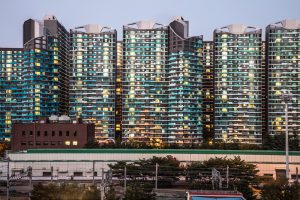 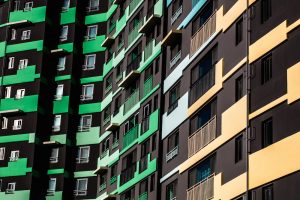 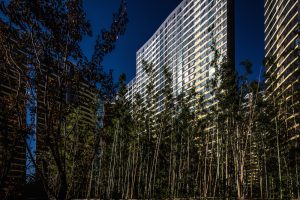 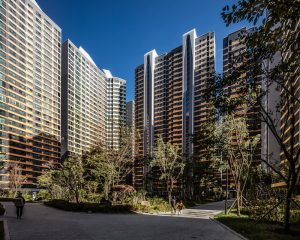 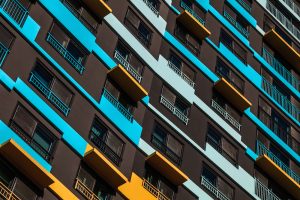 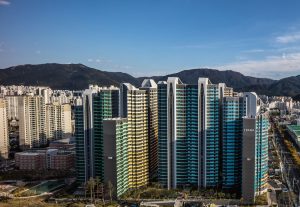 IPARK – Creating points of identity
Daegu is the fourth largest city in South Korea and is often referred to as ‘Textile City’, due to its rich history of manufacturing textiles and clothing. As a ‘Fashion Capital’, Daegu is host to a number of annual fashion and textile fairs.
However, within the city mega-blocks dominate the urban scale, presenting repetitive silhouettes with little individual identity. In both IPARK developments (Block 1 and Block 2) a pointillist framework of colour in two distinct designs – similar to the texture of a fabric or a media screen – is used to connect and dissolve the individual apartment towers into one consolidated mega-block, whilst creating distinct identities for each development within the Daegu cityscape.
On the urban scale, this use of colour zoning not only reinforces identity, it also establishes community, reveals principal access points and communicates the relationship between the inside and outside of the two mega-blocks.
On the neighbourhood scale, the façades transform from a typical grid of windows into a textured and articulated field of colour. In Block 1 the façade construction receives a matrix of options for additional layers that respond differently to each opening and balcony. All together, they form a system of horizontal bands that extrude over the face of the wall, offering the desired depth and shadow effect. Every apartment becomes unique, reinforcing a sense of identity and ownership for its residents. In Block 2 a diagonal pixilation of colour blocking is applied to achieve the same results.

In both blocks the courtyard facades employ warmer colour tones in order to reflect the more intimate, community scale of these urban interiors. 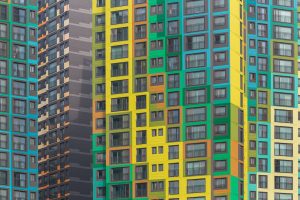 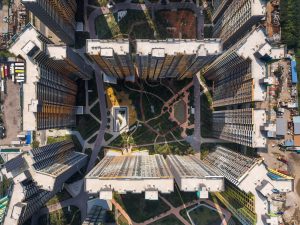 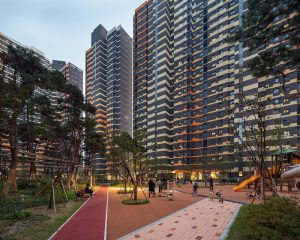 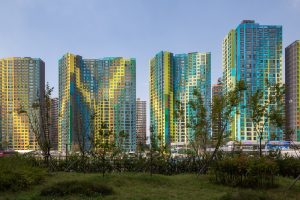 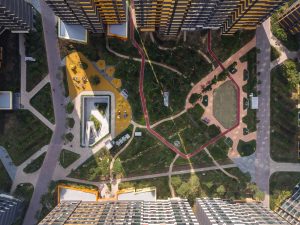 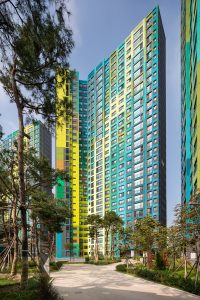 Promoting health and well-being
“The pointillist composition of the facades lends both the individual apartments and the whole development a distinct and recognisable identity within Daegu, while the nature-filled courtyards are a singular feature that offer the residents a safe and healthy lifestyle on multiple levels.” Ben van Berkel

Contrary to popular belief, many of the luxuries commonly associated with high end residential developments are no longer limited to the affluent alone. A growing consciousness of all things beneficial to health and happiness is resulting in a trickling down effect and a widespread societal demand for healthy living environments. Today’s residents want convenient shared amenities which encourage a sense of community and promote physical and psychological wellbeing.
For the IPARK developments, Hyundai Development Company – which enjoys a market-leading position in the construction of private housing – asked UNStudio to assist in creating apartment developments with a ‘people first’ approach: residences that offer more than merely a place to live, but rather a place to establish a new and healthy lifestyle.
The letter ‘I in IPARK stands for innovation and reflects Hyundai Development Company’s commitment to innovate beyond the conventional concept of apartments. ‘PARK’ symbolises a space which creates enjoyable and comfortable cultural experiences.
As such the buildings in the IPARK developments are organised around large, programmed communal courtyards. Conceived as urban interiors, these courtyards become a shared space for all residents and cater for a wide variety of collective and solo activities. A healthy lifestyle for all ages is supported by a verdant landscape of trees and vegetation, while a forest zone creates a buffer between the personal scale and the surrounding buildings and provides privacy for the apartments on the lower levels.
The intent of the landscape design is to create a flexible web of areas that either link to the shared amenities of the development – for example the library, swimming pool, retail outlets, community and fitness centres – or provide safe areas for playing, relaxing and gathering.
Extensive planting is interlaced with trails of varying speeds: from a 400m running track, to a gravel forest trail featuring water elements. Wide boulevards link all the individual areas together while smaller paths connect to the lobby entrances of the buildings.

Residents arriving by car can choose to either retreat (go directly to their apartment through their dedicated lobby), or engage (stroll through the landscaped areas and meet with neighbours). As such personal time, space and experience can become valuable assets not only at home, but also in shared spaces and in direct association with nature.