The residents of the luxury Park Hoog Oostduin in The Hague have recently moved into their apartments. They now live quietly in green surroundings, but in the heart of the city as well. Therefore, the access pass to their private parking garage reads “Living in the park, enjoying the city”. 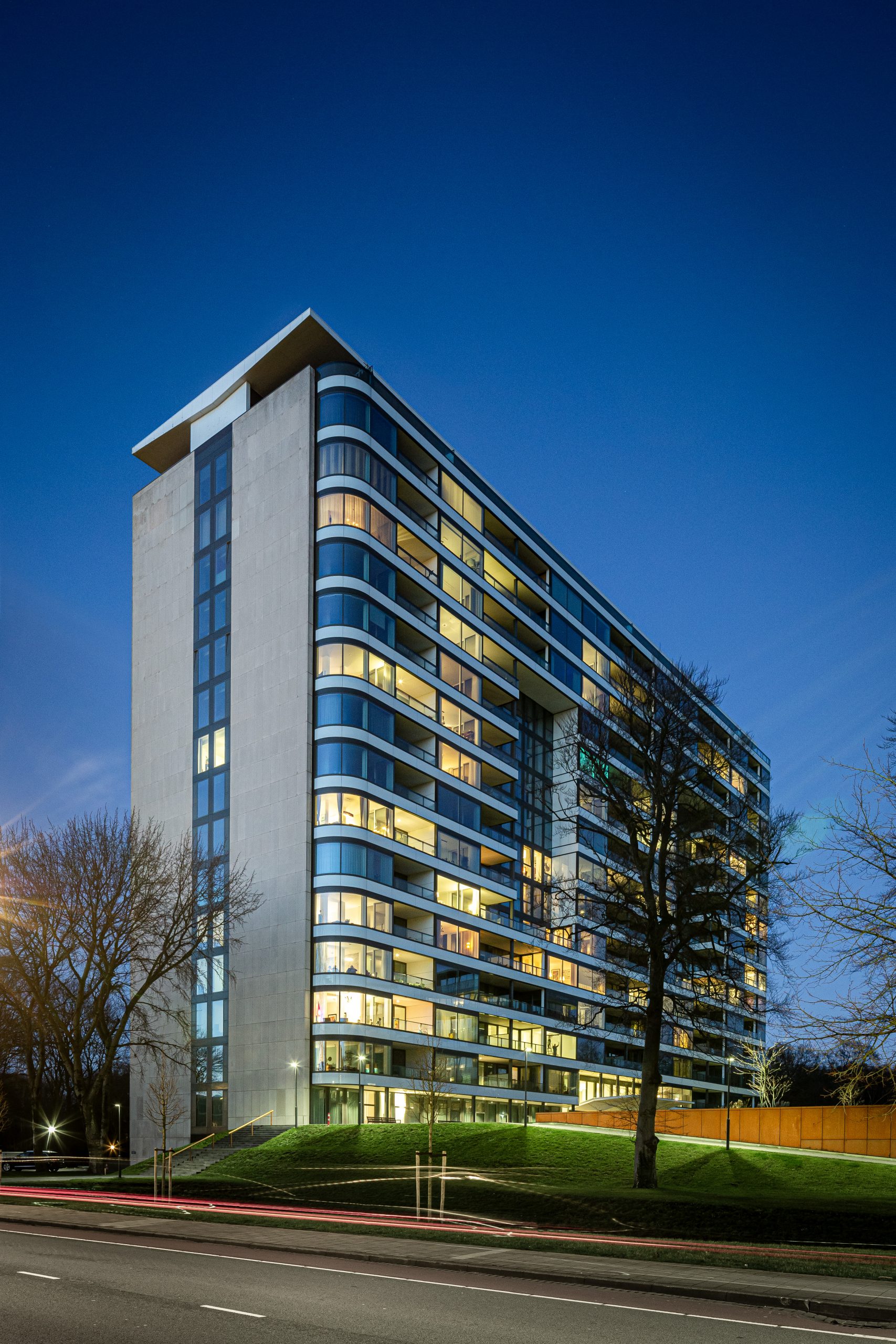 modernist giant
The project designed by architectural office cepezed is a transformation of the former Shell office at 75 Oostduinlaan, which had long been part of the Shell campus in the stately Benoordenhout district. The 1968 ensemble was originally designed by H.E. Oud, son of the well-known modernist architect J.J.P. Oud. The most important part consisted of a considerable high-rise block, visible from afar in many places in the city. Immediately at right angles was a second, smaller and lower building section. The complex was built on the edge of the Oostduin-Arendsdorp estate, from which it took away a large area of ​​greenery. It had a large underground parking and nuclear cellar with a parking plaza on top that rendered the area even more stony. 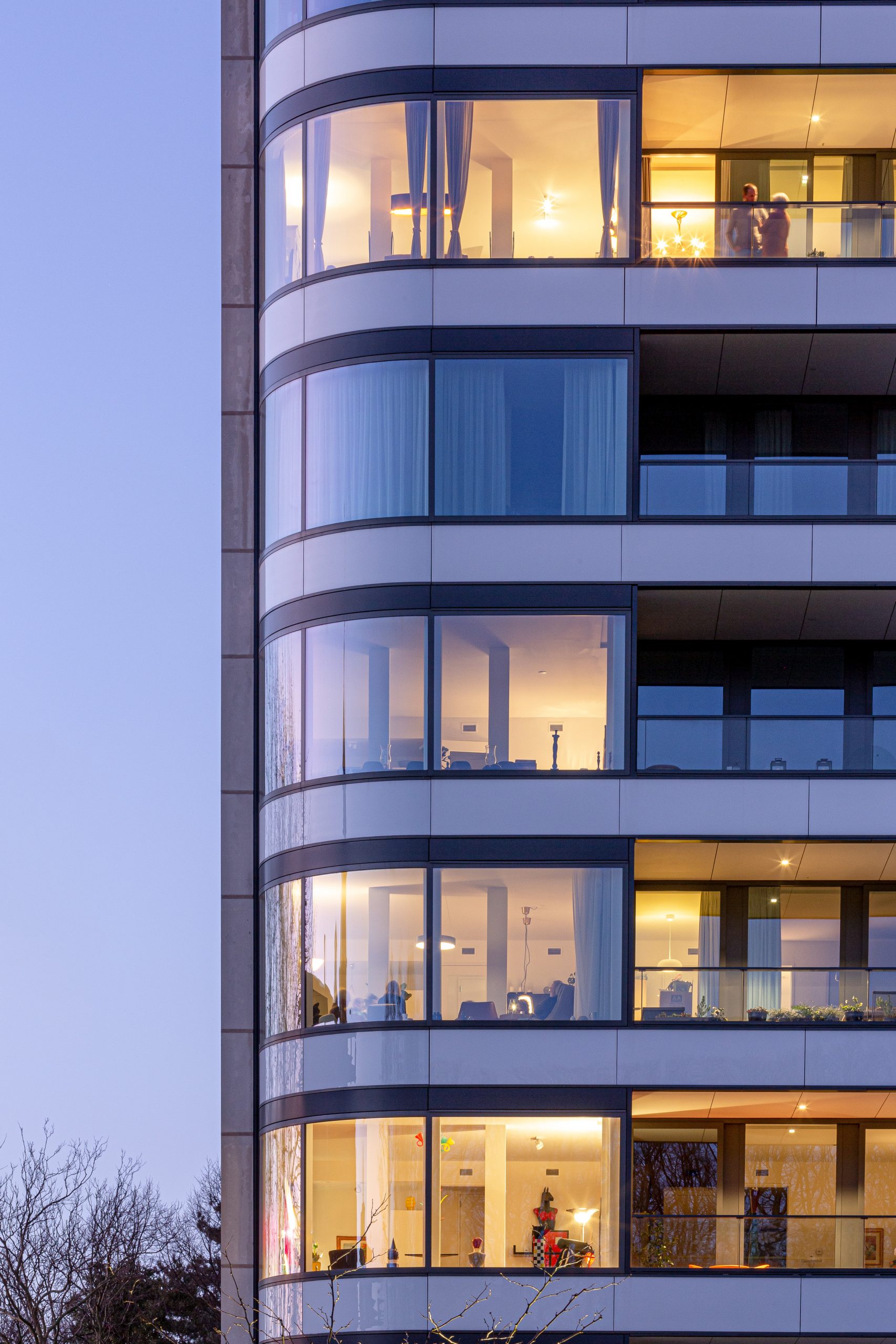 maximum quality
The transformation has been entirely focused on sustainability and maximum quality. The complex was outdated aesthetically, functionally and regarding the construction physics. It had to be transformed into a high-quality residential environment; with comfortable apartments in the higher segment of the market and embedded in an overall experience including a pleasant urban setting. Also important were a high degree of comfort and facilities for the residents, such as the various services that The James Company takes care of from the entrance hall of the renovated complex.

The existing situation posed a considerable challenge for this purpose, but it certainly also had qualities, such as its location amid the green, expansive views and a fine-meshed stability structure of the high-rise building. cepezed was elected as architect because of its experience with complex transformations and a plan that offered maximum solutions and possibilities combined with a minimum of highly purposive interventions. The design is based on and makes use of existing characteristics and qualities as much as possible. However, the existing low-rise was unsuitable for housing. Hence, this structure has been demolished and replaced by new construction. 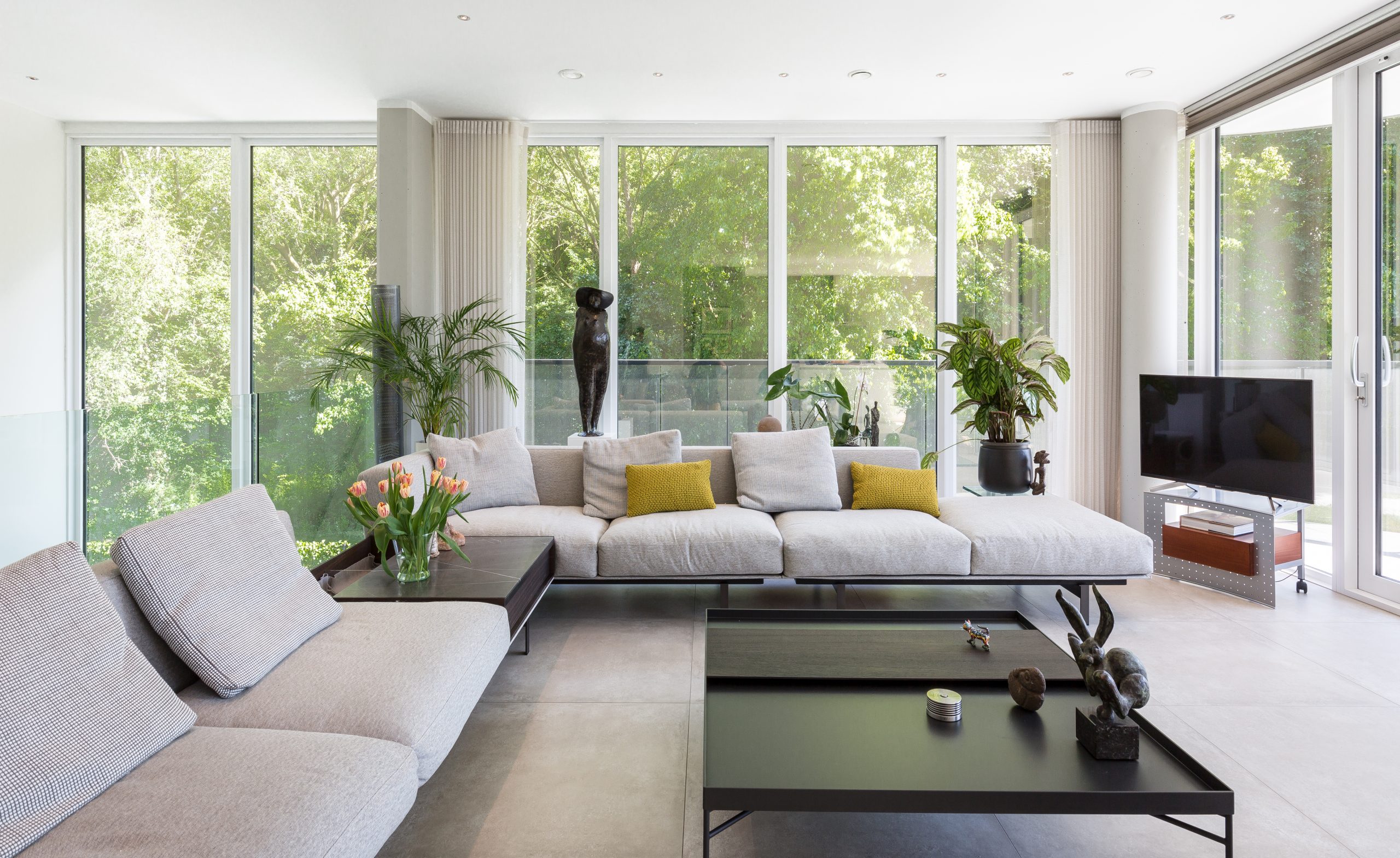 high dune
In the new setting, the high-rise is called Hoge Duin (High Dune). With a structural grid of 1.80 m, the building consisted of office strips along the façades, a core strip with stairs, lifts and shafts in the heart and corridors to the offices on either side of the core. Therefore, the dwellings do not have a traverse-like typology with windows on the front and back. Instead, they are oriented along the façades, just like the offices before. As a result, they receive a lot of daylight and have a panoramic view; of the city center on one side of the building and the sea on the other. Just like the large free height of the apartments, this contributes to an enormous spatial experience. 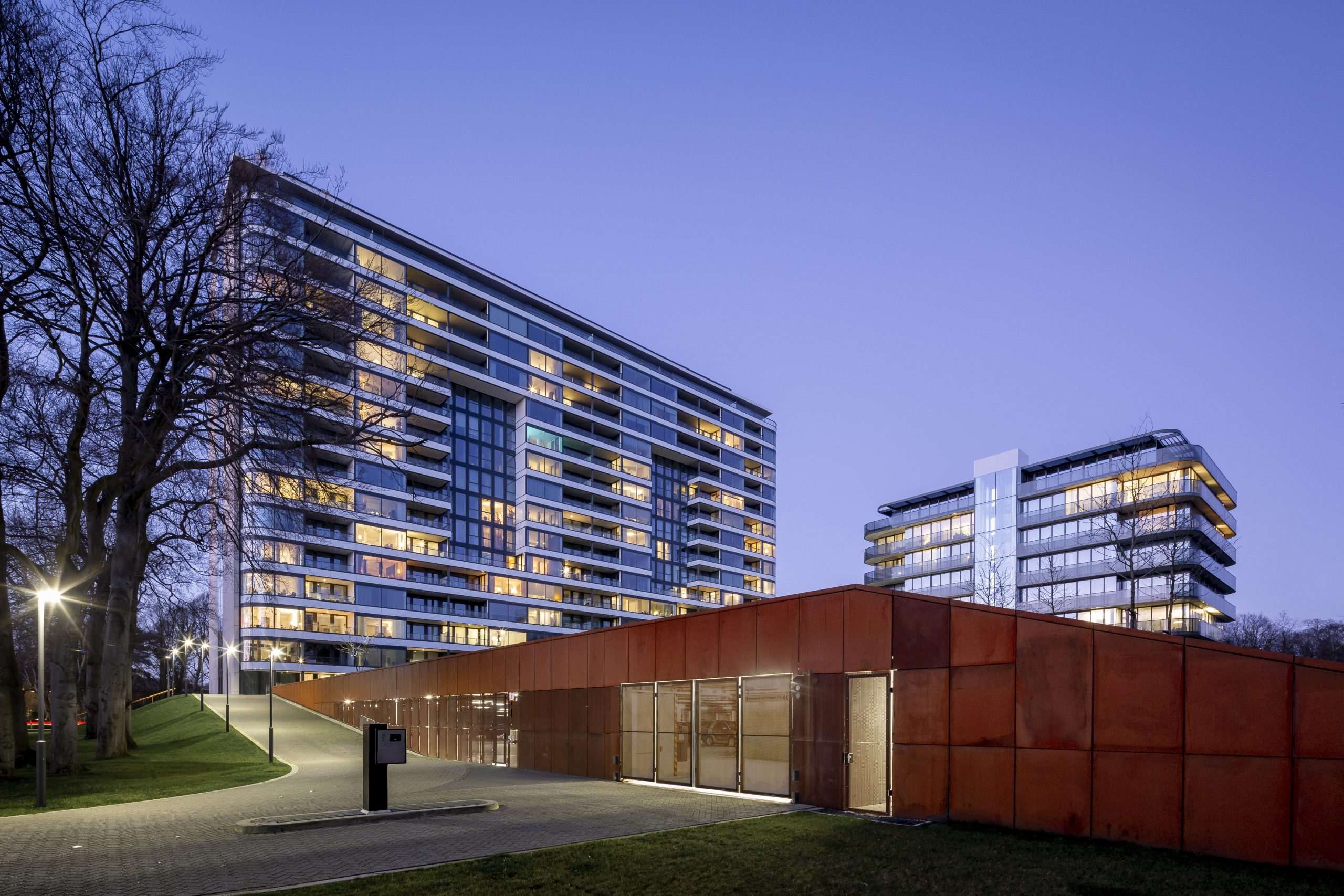 lightweight extension
However, the existing office strips were not deep enough for the homes. In addition, the apartments had to have large, spacious outdoor areas. On the sea side, therefore, the former corridor has been added to the houses, while loggias have been created here within the existing building contour. On the city side, the building has been provided with an extension three meters deep, containing balconies and extra living space. This extension consists of a steel “rack” with floors of composite slabs with profiled steel sheeting. The rack is relatively lightweight and transfers its loads to the existing construction and the existing basement, so that it could be realized without additional foundation. All apartments are accessed via the former corridor on the city side. For a pleasant, open and spatial experience, voids have been created in the access zone. 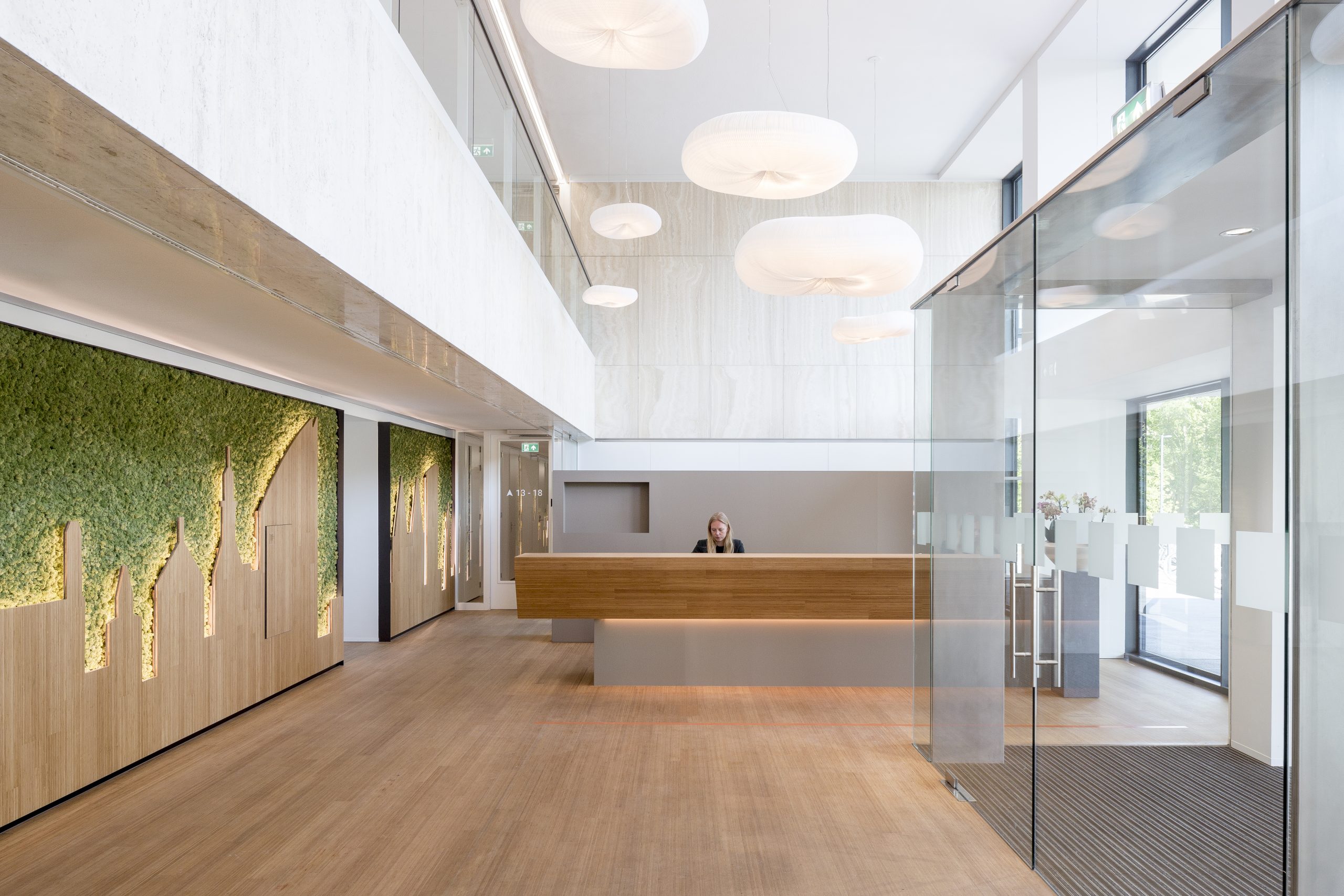 image with allure
The heads of the building originally contained escape stairs. These have been moved to former shafts, making it possible to realize special corner dwellings with an even wider view than the other apartments. The limestone end façades of the building have been preserved. The longitudinal façades have been completely renovated according to current building physics standards. With high strips of glass and strips of white emalit, they respect the modernist character of the existing building, but at the same time give the image of a residential building with allure. Two large recesses in the extension rack on the city side are part of a varied and intriguing view. 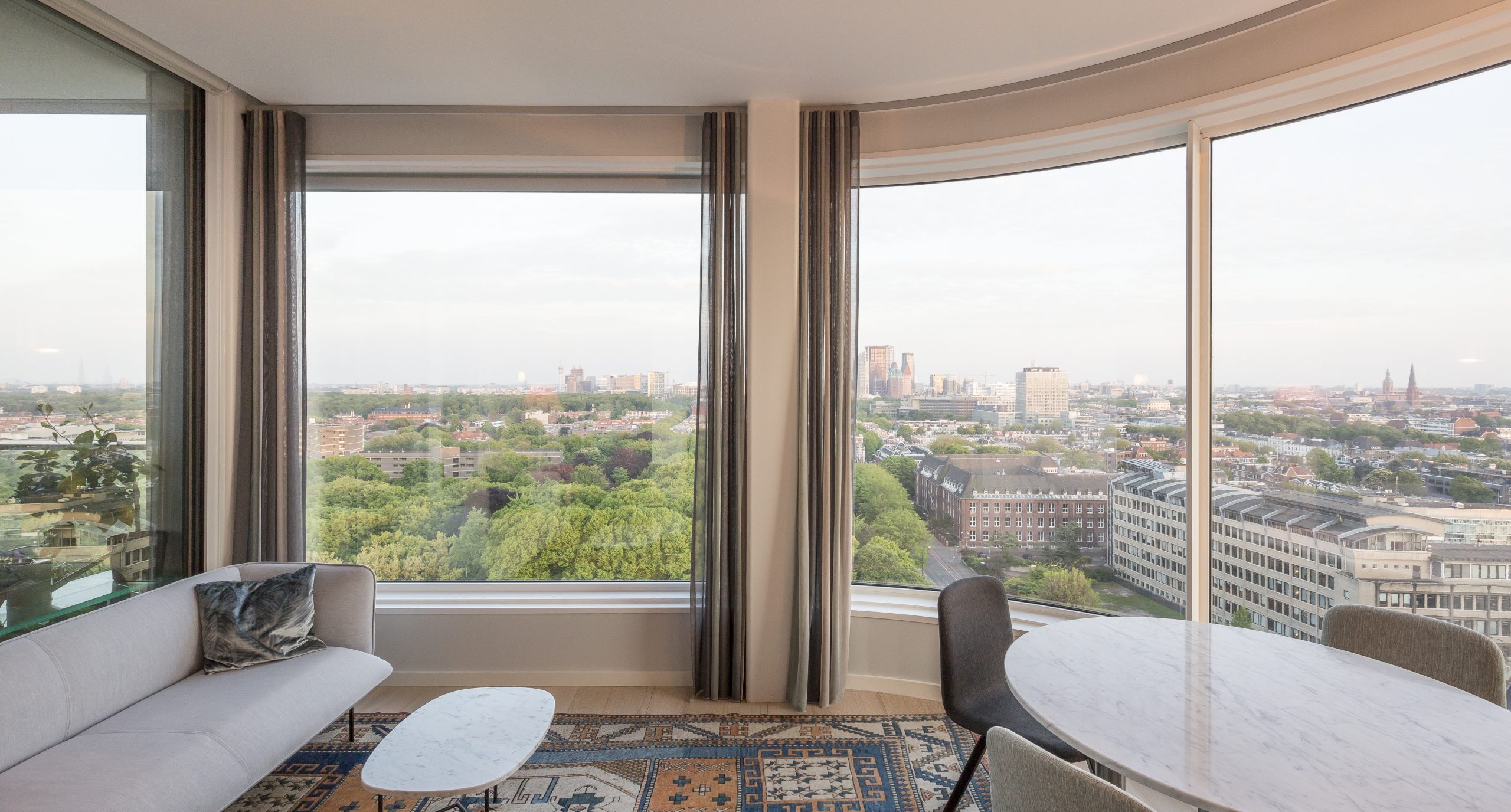 flexible layout
In total, over 180 owner-occupied and rental apartments have been realized in Hoge Duin, varying from 70 to 200 m2. Some of these are short-stay apartments. There are also a number of hotel apartments for residents’ guests. In addition, eight spacious penthouses with dimensions between 165 and 300 m2 have been realized in the former installation spaces on the roof. The structural grid size of 1.80 m meant that the house dimensions and layouts were adaptable to market demands until well into the design phase. Now after realization, the grid also offers many opportunities for change. 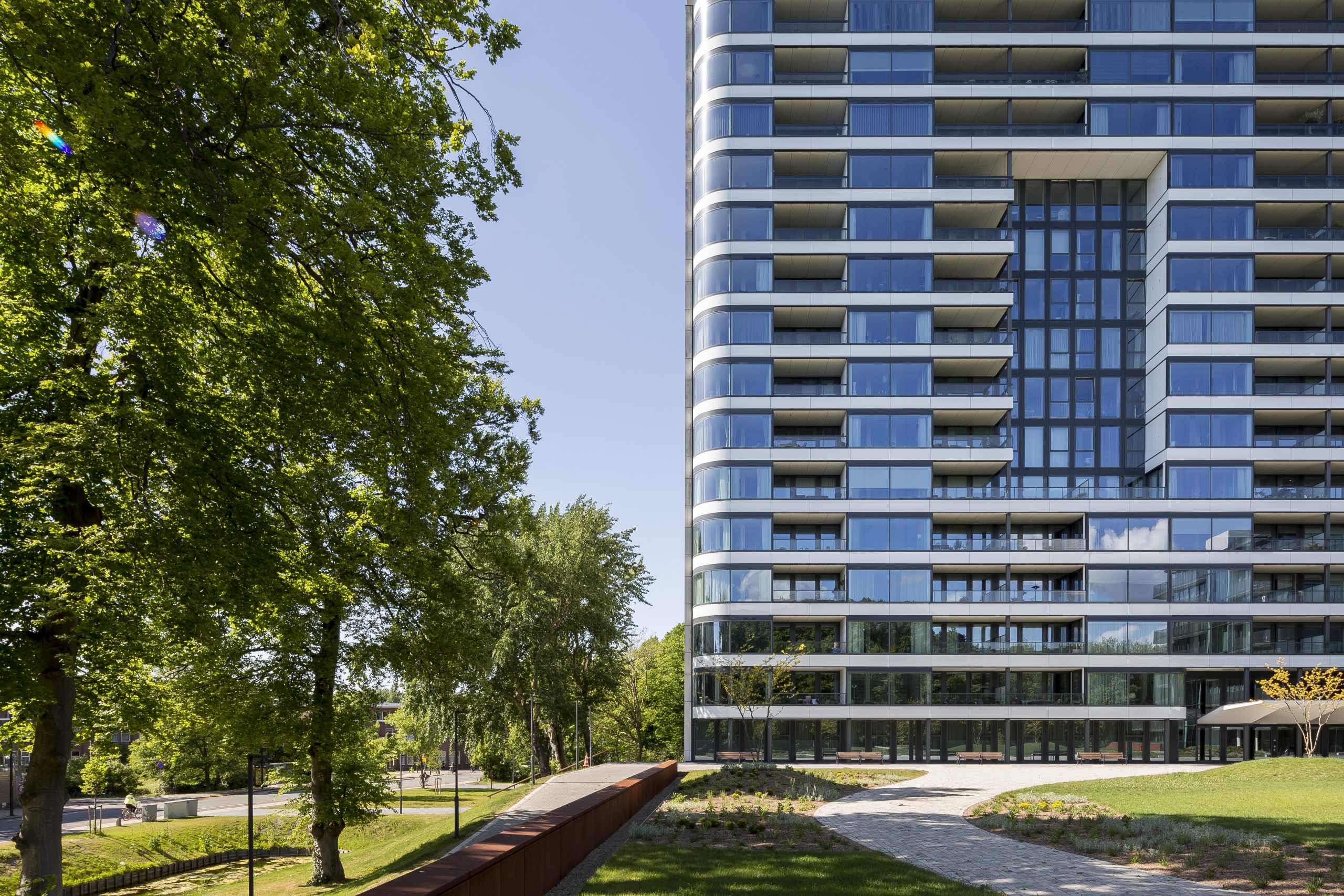 low dune
The new low-rise building of the complex is called Lage Duin (Low Dune) and is built on the foundation of the demolished low-rise. The existing elongated volume was directly at right angles to the high-rise, but the more compact, square new-build was built some distance from it. Thus, there is more space between the two building parts and the complex as a whole has more transparency and relationship with the surrounding greenery. The new building consists of eight floors and comprises a total of 30 dwellings. Three houses at the bottom are double-layered and the houses at the top are penthouses. The low-rise building gives the feeling of ‘living in the park’ even more than the high-rise; the dwellings are provided with sliding doors and balconies all around and the lower houses even have a garden. The corridor zones in the low-rise intersect the entire building volume and have transparent façades. Therefore, the corridors receive ample daylight and always offer the residents a view of the outside. Despite the limited number of homes, the building has two lifts. This reduces waiting times and ensures there is always a lift available, even in case of maintenance or breakdown. In terms of design and materialization, the low-rise is family of the high-rise.

park and parking
To further optimize the quality of living, much attention has been paid to the forecourt, which used to be a large stone plain with cars. On top of the existing parking basement, an extra parking layer has been realized and on top of that, a landscape design that completes the experience of living in greenery. To enhance this experience even further, the former parking spaces along the street have also been canceled. The watercourse that extends around the rest of Oostduin-Arendsdorp has been extended here. The houses are therefore completely in the park in all respects. The garage offers space for more than 250 cars in the new situation. Along the street, it has a façade finishing of corten steel.

sustainability
The project devoted a great deal of attention to sustainability. Partly because of the reuse of many materials, the authorities used it as an example project when the government-wide circular economy program was introduced. Of the existing complex, the high-rise structure and garage have of course been reused. But the travertine wall finishes in the existing entrance have also been retained, while the imposing sculptural concrete canopy above the entrance has been completely incorporated in the new design. The reuse of the ceramic tile panel by artist Karel Appel deserves special mention. This first graced the former low-rise of the complex and is now included on the sea side in the façade of Hoge Duin.

In collaboration with engineering firm Repurpose, it was also ensured that many materials released during the dismantling of the existing complex were reused in other projects. For example, large numbers of doors, closers, wall lamps, office furniture and floor coverings have found their way into other projects and the old cooling installations and kitchen facilities have also been reused elsewhere. At least 80% of the demolition materials have been reused. Additionally, the new apartments themselves are fully equipped with floor cooling and heating, for example, as well as with sun-resistant glass and heat recovery units. 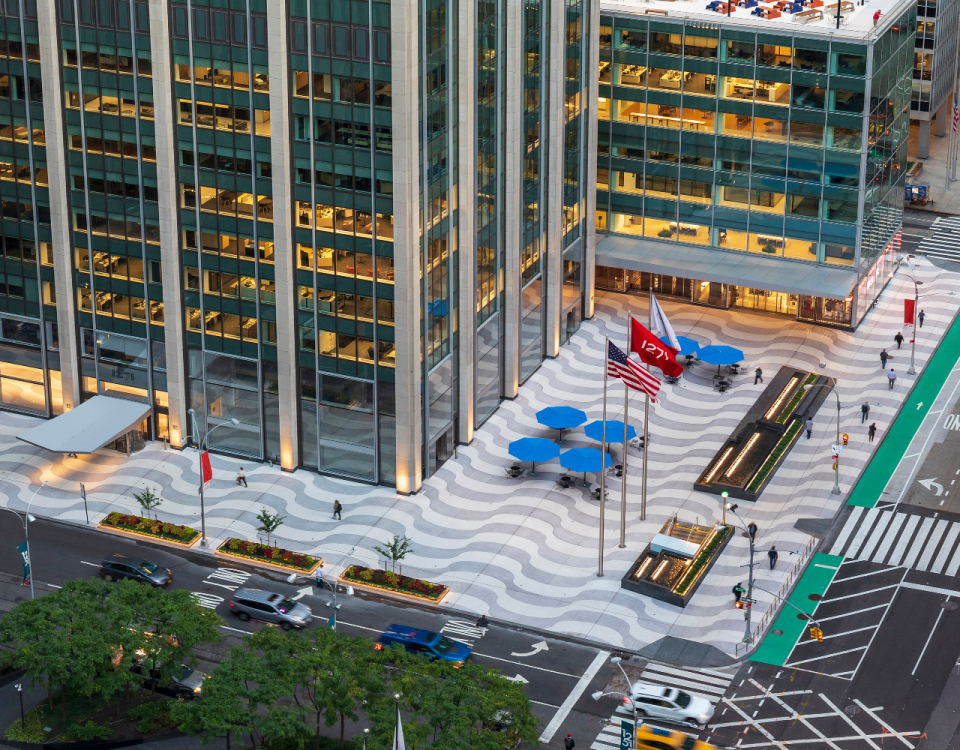 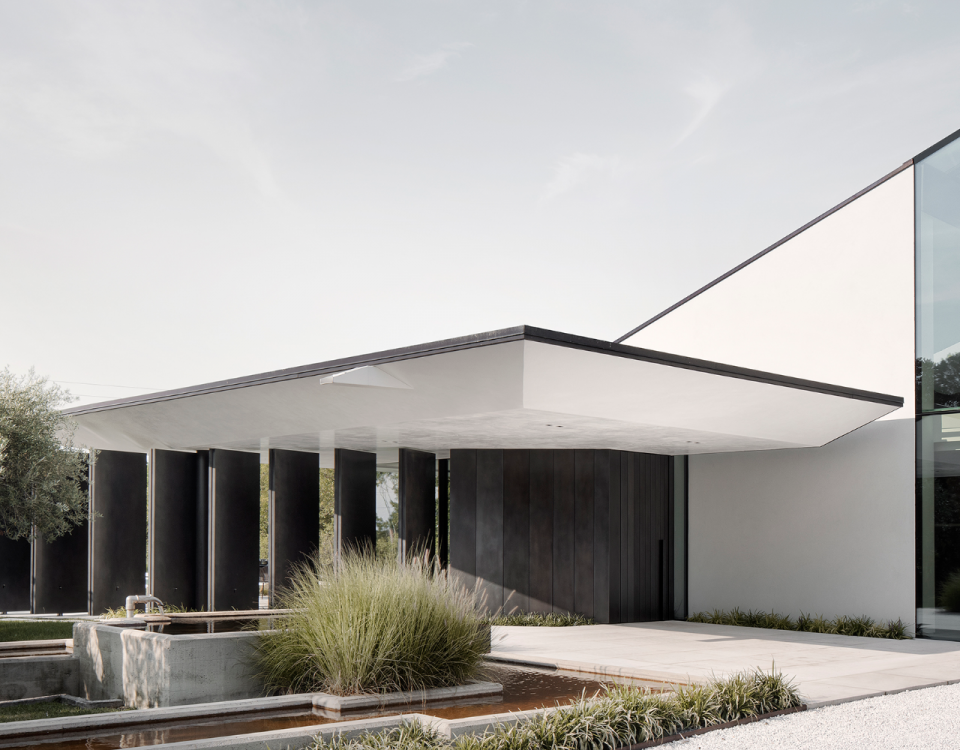 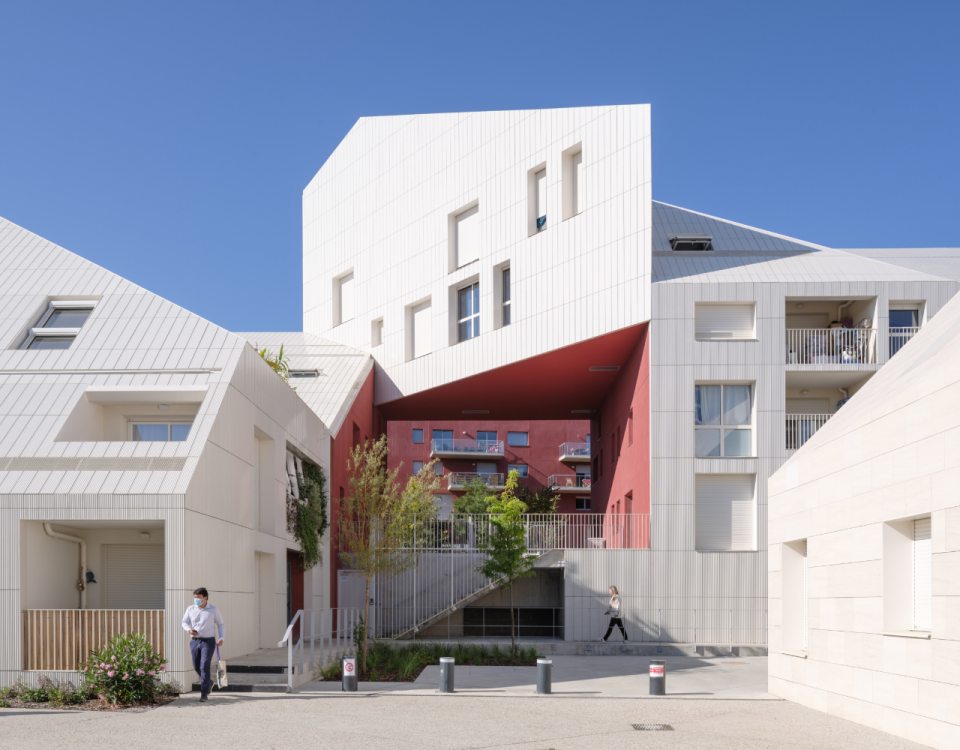