Passionate about music, which he practices with talent and professionalism, Vittorio Simoni integrates rhythm, touches and sense of detail to his architecture.

In 2015, when Vittorio Simoni transforms the old office building of the Eisden mine in a 4-star hotel of the Different Hotels Group, the Terhills Hotel, it is a sort of return to his roots, when his grand-father came from Italy to extract coal in the Limburg mining district. Today the name of Simoni is famous and renowned internationally, with Vittorio and the quality of his architectural work as well as with Matteo, his son, a well-known film actor.
Our aim here is to present the architect, his projects and his approach. The man is enthusiastic with a mischievous look and an open spirit. He welcomes us one morning last December in a large pleasant room and straightaway opens to us. His passion for music, travelling and photography, the importance of his family, the loss of his oldest son in 2003, his team of colleagues which he knows he can always rely on, and his professional career Vittorio Simoni (Eisden, 1954), studies cabinetmaking before starting his studies of architectural drawing, then interior architecture at the Hasselt Sint-Lukasinstituut, where he excels with creative ideas and his mastering of materials. After working during eight years with the architect Alfredo de Gregorio, he continues his career by founding his own office in 1987. All his actions are already guided by his desire to integrate the construction and structural elements in interior architecture. “I am not a decorator, he says.” Twenty years later he opens to architecture. Invited by the Maastricht Academy of Architecture to give a lecture, the president made him a proposal to continue his architecture studies. He received his degree with a thesis on the interest of the “situation theory”.

Following the example of the German architect Günter Behnisch, Vittorio Simoni claims a methodology of specific conception meaning that the situation carries the solution. The environment, the climate conditions, the cultural context, the program the understanding of the customer’s desires and needs are a few of the variable parameters determining the situation. The conception comes afterwards. It is always in that direction that he orientates his work. Experience is essential. “I am not a theorician, but a professional. Some situations I can’t explain. I just feel them.”
For Vittorio Simoni, the shape of a building is no more the result of a conscious choice of the architect or the customer but the one of the interaction between the different situations. That is why he probably created a ‘laboratory’ where he tests the various combinations of materials. He even created a color book with Caparol, a German paint manufacturer. Very ingenious, this innovative color chart, intentionally limited to 72 harmonized tints, is designed like a system of colored cards which can refold on each other to offer immediately a complete view on all the possible combinations adapted to the situation, which is the basis of all his work.

With his colleagues (a small family, he says), he can follow each project, which is very important to him. Contrarily to many architects favoring a formal recognizable language, like an imprint of their signature, his projects are all different, only dictated by the situation theory. Advocating a welcoming simplicity, without trying to follow the trend of the Flemish minimalism, he has created many residential interiors, but also museums, hotels, exhibition halls, shops, offices and even the layout of a Beguine Convent and the arrangement of a barge into a guesthouse. He signed, among other things, the Fashion Museum in Hasselt, the entrance hall of the Stuk Kunstcentrum, a new wing of the Stayen stadium in St-Truiden, the 2007 edition of the House of the Future in Vilvorde and a small luxurious complex on the Lombok island in Indonesia, private residences in Altea (Spain), and the Dirk Bikkembergs shops in Japan. Always respecting the Man and the Environment. From the renovation of the Ommerstein castle in Dilsten-Stokkem to the layout of a 32 sqm studio on the Belgian Coast, he always follows the same principles and the same methods. Irrespective of the budget, he starts his work with the same attitude and his usual enthusiasm. Everything is based on trust.

His capacity to estimate a situation intuitively is also recognizable in his architectural approach for the starred restaurant ‘t Zilte, on the 9th floor of the MAS (Museum Aan de Stroom) in Antwerp, signed Neutelings Riedijk Architecten. The interior volume of this select gastronomic place respects the rhythmic of the windows. Bathed in light, with great sobriety, it is possible to fully enjoy the culinary experience. From the colors to the tailor-made furniture, from the arrangement of the terraces to the table coverings, nothing is left to chance. The place where the Hotel Terhills was built has a strong emotional value for the architect who managed to inject a new life to the old offices of the Eisden mine. This historical building of the years 1920 has been the source of inspiration for this sophisticated style rehabilitation.

Admirer of Carlo Scapa, Vittorio Simoni is sensitive to details and to the importance of choosing the right materials. He even became a friend of his son Tobia, with whom he realized the Sports Hall De Soverein in Lommel.

In his life as a teacher, he wants his students to learn to determine the exact answer for each project. He asks them virtually to ‘enter’ with him into the building they are designing and observe and understand its history. Music stays very present in his daily life. Even if he sees a link between music and architecture, he notices also the opposition between these two arts. “The difference is a question of temporality. The first one is instantaneous, the second is more connected to time and space, and the errors stay irrevocably visible.”
Among the books written on his career, the work called ‘Settle In’ includes a selection of architecture photos showing his sharp look on the world. A few issues and reflections of an open traveler eager for details, aesthetic and tactile impressions. Records from a man with held back emotions. 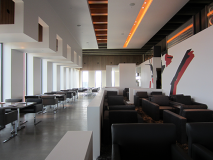 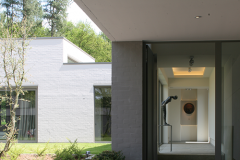 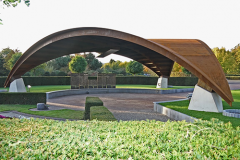 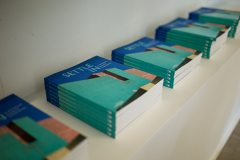 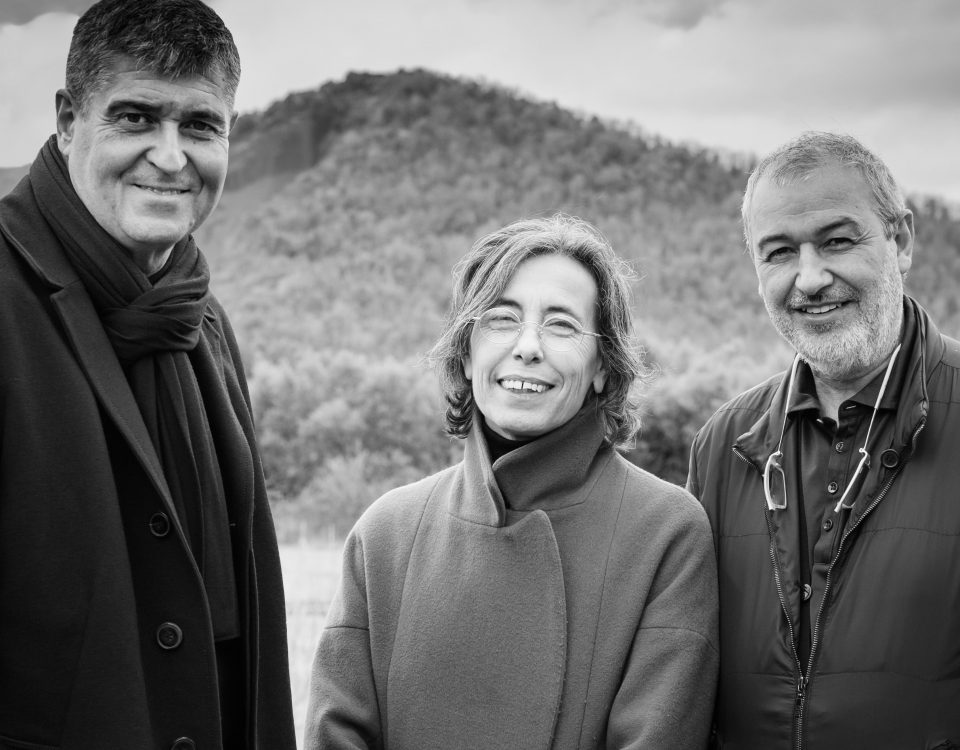 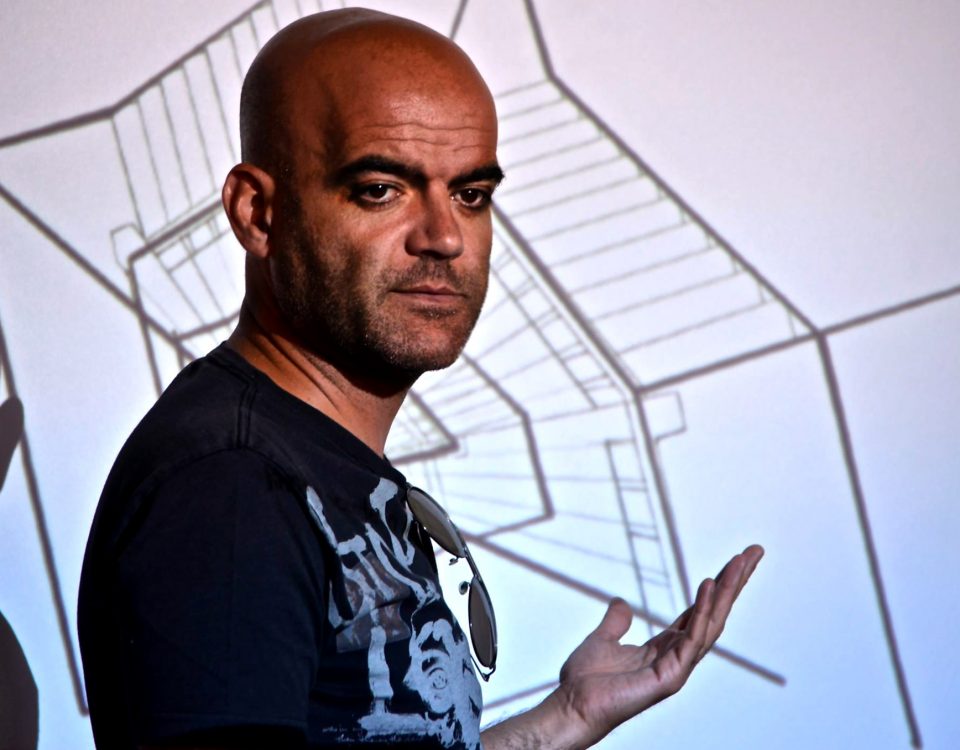