The project proposes a complete renovation of a poor architectural quality building from the beginning of the ‘80s, outdated in terms of energy and distribution. The refurbishment converts the building into a contemporary property suited to the developing surrounding area, which has recently acquired strategic importance because of the opening of the new underground station. A relevant focus of the project is on the improvement of the building’s energy performance, in order to achieve standards of excellence.

By adjusting the volumes of the two ground-floor reception areas, the heart of the building’s connections has shifted to the urban fabric towards the underground station and the main boulevard. It has been given due prominence to the green area, which is currently also visible from the street. The flexibility of interior office spaces as well as the façade system was reconsidered, with a view to adapting them to the current energy-saving and soundproofing requirements. The building was taken apart, the composition of the various volumes re-proportioned and re-adjusted in order to achieve a much lighter and articulated configuration.

Anew porter’s lodge has been positioned right at the front of the property, consisting of a complex system of transparent glass and press-bent sheet metal seamlessly merging with the fence of the building’s property. Still within the perimeters of the site, an overhanging roof offers protection to the building’s guests.

The ceiling-to-floor design of the new insulated double-glazing façade makes the most of the transparent casing and allows for a full visual connection between the workplace and the external environment.

A compositional layer outlined by horizontal and vertical anodised aluminium intradoses, designed in such way as to fragment the building’s size, has been super-imposed onto the design of the various glass modules. 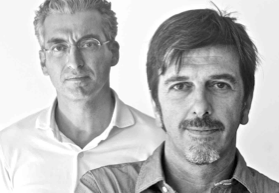 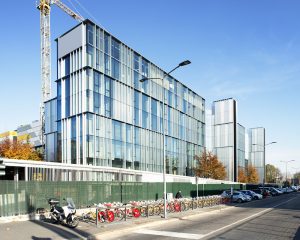 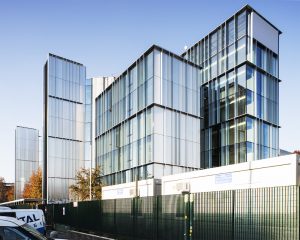 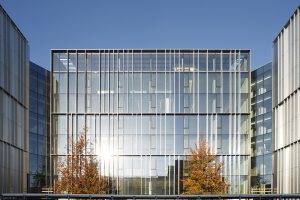 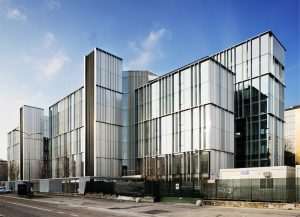 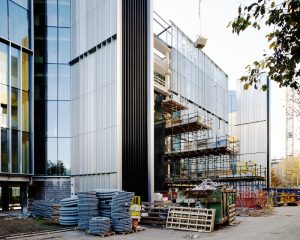 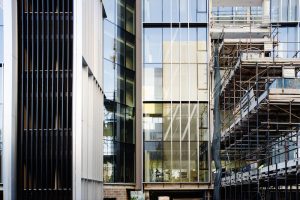 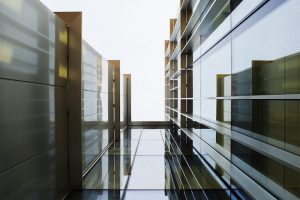 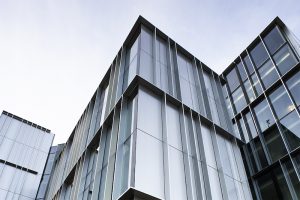 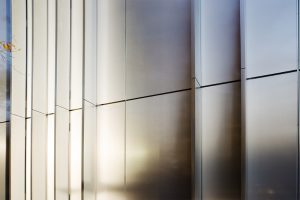