The urban specifications and regulations brief defined the envelope contours for the three entities of the city block G, by emphasizing the urban and architectural differentiation of “a unitary lower world” and “a highly diversified upper world”. This project is placed in this dialectic by adding to the opposition of the platform and the towers one of two differentiated blocks with regard to their expression, yet sharing common architectural and construction principles, like compactness and geometric rigor, the principle of reversibility and lastly, the differentiation and identification of the apartments.

Housing the common areas of the two blocks as well as the 18 SOHOs and 2 shops at the southeast and southwest corners, the foundation integrates the city block with its context while it also organizes transparencies, allowing glimpses of the patios in the heart of the block from the little north and south alleyways. A peripteral façade encircling the city block contains and unifies the programs and typologies differentiated within its perimeter.

Echoing the dissociation of a lower world from an upper world, the base is organized around the opposition of a continuous concrete orthogonal grid plan and an architectonic concrete façade and a fragmented city block interior composed of trapezoidal volumes in quincunx clad with aluminum siding on a mixed wood/concrete framework. This opposition of geometry and material between the public sphere and the private sphere is both traditional and Parisian in that it recalls the organizing principles of royal Parisian squares.

The principle of the SOHOs is to articulate, in a double-height volume and leased by the same person, serving as a professional space with an adjoining apartment. By allowing for a certain level of porosity between the relatively fragmented spaces, this typological arrangement creates a degree of indetermination between dwelling and working areas while guaranteeing a minimum level of intimacy.

The typologies proposed for the SOHOs reference the townhouse more than the ground floor apartment, with the private exterior extension around the 6 terraces and 6 micro patios laid out in quincunx fashion to allow the maximum amount possible of natural light to penetrate through large glazed bays in the heart of this city block subjected to the shadows thrown by surrounding towers.

In the spirit of the “upper world” defined by the AUC, Nicolas Hugoo Architecture proposed a wide range of apartments sheltered in an airy architecture open to the wider Parisian cityscape.

The plan is concentrically organized around a core of vertical circulations. The compactness of the circulations ensures optimal distribution of the apartments. The first circle in the interior of the apartments gathers the functional spaces. Thus, entries, bathrooms and storage occupy the spaces furthest from the façades, deep inside the apartments, to the benefit of living spaces (living rooms, bedrooms and kitchens) with bigger dimensions and open to the exterior. Finally, the exterior extensions border the apartments around the entire periphery of the block.

Set back from the slab protectors, the vertical walls of the envelope are light and continuous. They are comprised of ensembles of larch wood carpentry. The façade fillings alternate with both fixed and opening glazed frames and solid parts clad with anodized bronze aluminum. Vertical wooden larch wood braces introduce a tight rhythm that gives the ensemble a domestic scale.

The screens and roller blinds have the same bronze shades as the solid areas. Prefabricated concrete balconies narrow at the edges. They are doubled by suspended ceilings that absorb the thicknesses of waterproofing and insulation. The brushed aluminum ceilings form floating reflective planes under the balconies.

Overhanging slabs surround the block with balconies, thereby offering exterior spaces to all the apartments and all the main rooms. At the corners, the façades are indented to form setbacks that open up larger balcony surfaces (up to 18 m²) in an extension of the living rooms. The indentations in the façades to the right of duplexes form genuine double-height outdoor rooms.

The practically cubic geometry of unit G2 (25m-wide sides by 30m height), by Moussafir Architectes, results in an extremely compact and deep building. The advantage of this compactness to the energy economy obtained by limiting surfaces subject to loss and to the rationalization of distribution, but it does not facilitate penetration of natural light or the flexibility of spaces. This is why we proposed a programmatic distribution and a concentric structural scheme based on a center/periphery polarity. G

The service areas of apartments (bathrooms, recesses, storage) are dissociated from the served spaces (living rooms with their exterior extensions) according to a strict and unitary scheme that structures the plan on the scale of the block. Everything within a central core of 8mx8m contains the utilities and vertical circulations, the next circle, 3m60 wide, contains bathrooms, corridors and storage cabinets and delimits living areas, mostly glazed on the exterior.

Each floor contains 6 apartments. Just as with unit G1, no apartment is exclusively oriented northward. The larger apartments all have corner living rooms offering distant views between the towers, toward the heart of the city block or along streets. Spatial continuities Kitchen-living room or bedroom-living room extend the linearity of the façade perceived from inside, providing breadth to the living rooms and augmenting the amount of natural light.

The organizational scheme dictates the structural principle: the floors do not rest cross-wall construction but rather on peripheral façade and on the central core, extending up to 7m70. The separations between apartments are exclusively made of light partitions, which enabled us to avoid the obligation of superimposing identical typologies and allows for modifications of typologies over time. The envelope takes the form of a waffle structure making it possible to forgo broad spans and free up the corners on one floor out of two. Borrowing more from civil engineering than other current construction techniques, this expressive structure is built with concrete poured onsite with large dimension metal formworks. 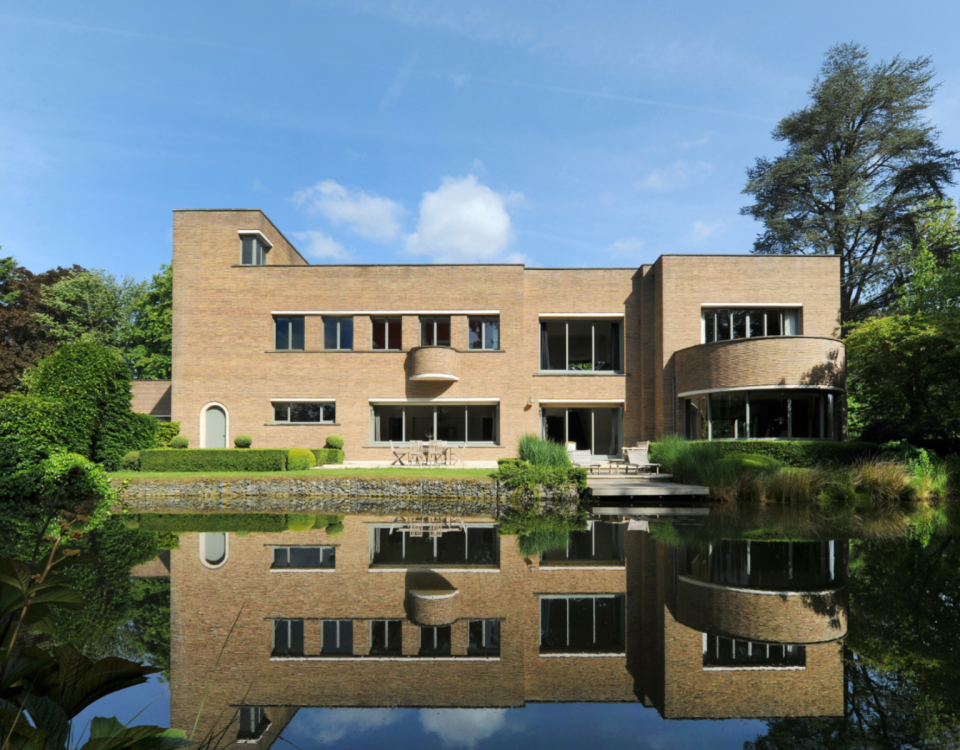 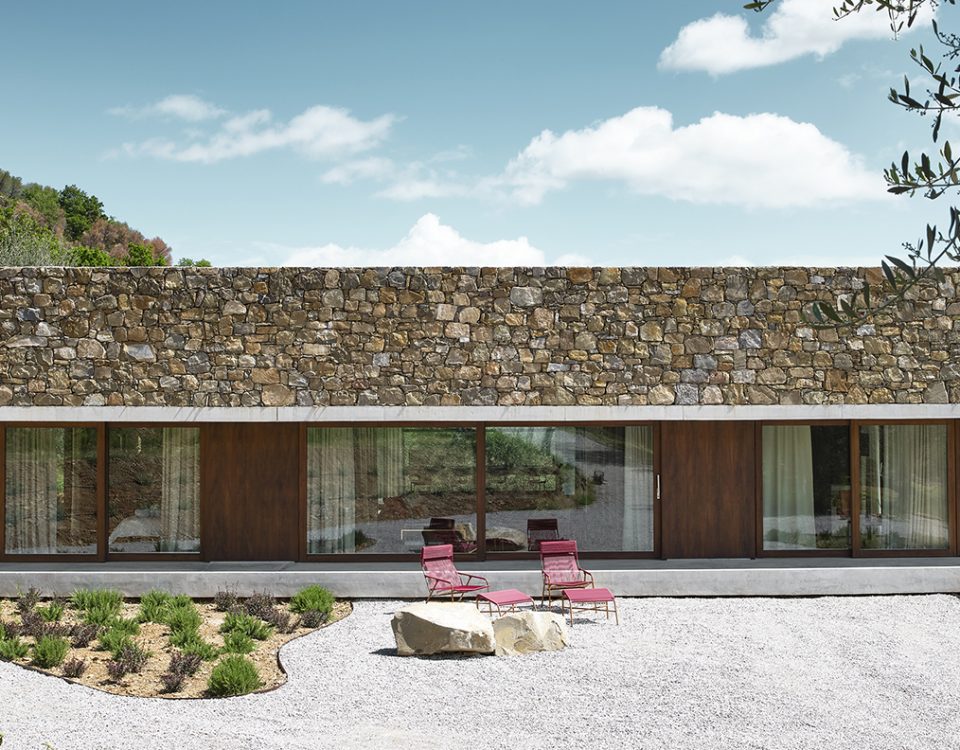 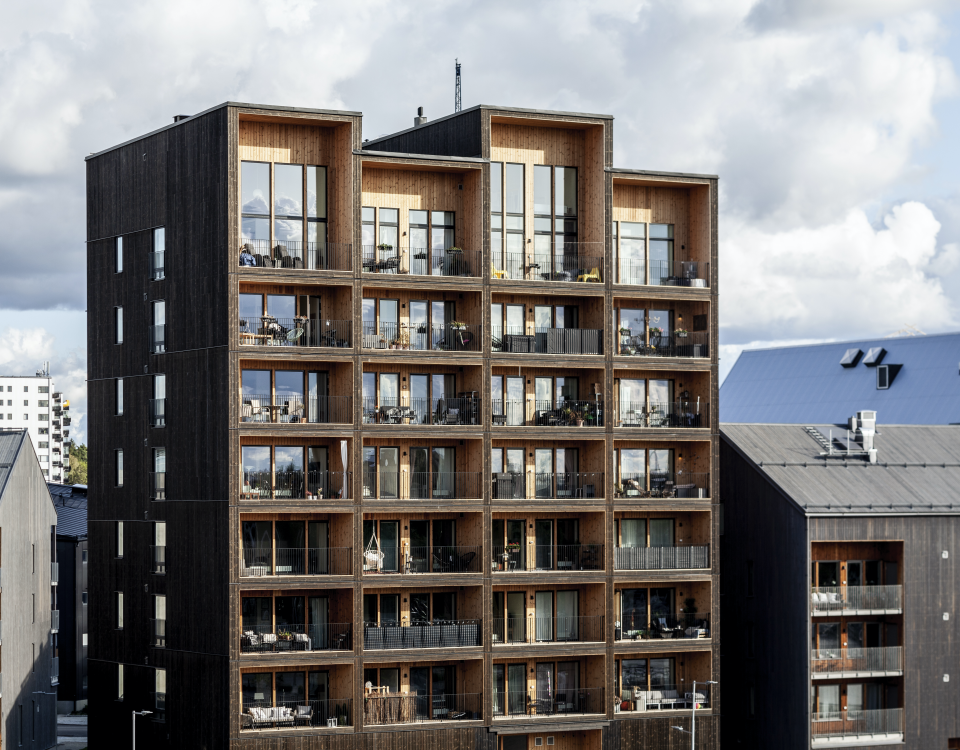