The Paris office OPUS 5 delivered the third and final phase of the rehabilitation of the Abbey d’Ardenne, in Normandy, France

i29 transforms National Museum of Ceramics Princessehof in Leeuwarden, NL

The Paris office OPUS 5 delivered the third and final phase of the rehabilitation of the Abbey d’Ardenne, in Normandy, France. To complete an investment project of over 25 years on the site, the former stables of this gothic abbey are now home to an exhibition gallery.

The Abbey
—
The Abbey d’Ardenne is one of three great Premonstratensian abbeys in Normandy. Its magnificent buildings dating from the 13th and 18th centuries, had stood abandoned and in ruins since the French Revolution, when they were bought by the region, which has restored and repurposed them to house the Institut Mémoires de l’Edition Contemporaines (IMEC).
This partially ruined church, which also suffered bombardments in 1944, first underwent a major restoration, followed by a redevelopment project designed to meet two major challenges. The first, to reinfuse the monument with life, by finding a purpose for it and by leveraging new uses to highlight its beauty. Second, the program had to express the power and the presence of its contents, as well as the unifying vision of its collections while also ensuring optimal comfort for readers.

The rehabilitation of the Abbey d’Ardenne, a coherent ensemble despite its collection of buildings dating from the different centuries, has been designed to be fully in sync with its times, and emblematic of the contemporary nature of the institution it houses and which underpins its new cultural and intellectual function.
The last phase of works at the Abbey is designed to receive the public. It includes the repurposing of the former stables into an exhibition space as well as the transformation of the Bayeux gate.

The exhibition gallery
—
A precious jewel case clad in clear stained beech wood panels, the exhibition gallery possesses all the accessories required for presenting art works. The refined interior contrasts with the agricultural building housing it, a simple parallelepiped built in rubble masonry with randomly placed openings. Its aesthetic value grows out of its opposition.
The use of wood in this project recalls the architects’ previous intervention on the abbey church and contributes to the abbey’s visual continuity.

Welcoming the public
—
This recently delivered phase includes the restoration of the Bayeux Gate. A 12th-century carriage gate and the abbey’s western entrance, it is now the public’s point of access and reception.
Formerly an open-air passageway, the interior space of the Bayeux Gate has been enclosed. Despite this changed vocation, the medieval construction remains intact in its new state. The openings have been filled with stained glass circled by “tunnel-frameworks” made of rusted steel. The furnishings, reception desk and benches, were all designed by the architects. 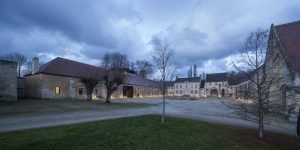 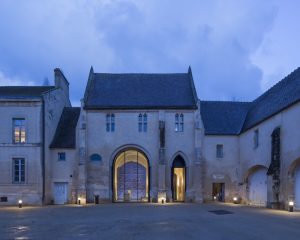 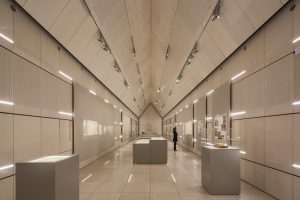 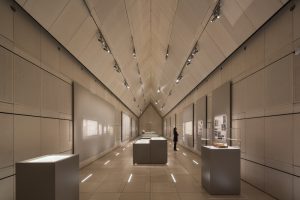 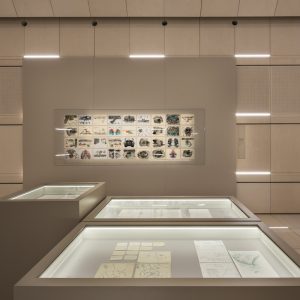 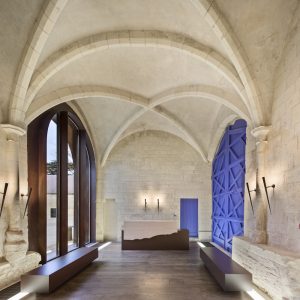 —
Opus 5 won the European competition to rehabilitate the “old bell tower” of Colombes, remnant of the former Church of Saint Peter and Saint Paul and symbol of this city located in the Paris region.

The redevelopment project approached this building as a monumental amputated sculpture. Fitting directly into the urban landscape and integrated into the city’s public space, it invites strollers to penetrate within and linger under its vaulted ceilings. Highlighted and magnified by a new floor and a reflecting pool, the image of the restored vestiges mirroring and refracting the architectural elements offers a spectacular feast for the eye.

Visible from the outside, a “phylactère,” the long swath of a big banner hanging inside the building, unfurls beneath the bell tower. This decorative feature enhances the poetry of this place, and its surface can also be used for projections in future exhibitions organized from time to time in this restored ruin.